The migration of all commission payments to ICM is a major Arkansas Blue Cross project initiative. Some agencies are already familiar with ICM because all Medi-Pak Advantage and Medi-Pak Rx product commissions are paid in ICM. At this time, all other commissions will continue to be paid through the legacy Marketing Commission System (MCS).

Not all products will be migrated to ICM at the same time. Corporately, the intent is to move all products to ICM, eliminating the need for two commission systems, two statements, etc. Because of the project scope, however, we will need to pay commissions using both systems throughout 2017 and into 2018.

To familiarize agents and agencies with the migration of Individual Metallic business into ICM, we have developed a series of FAQs and screenshots for your reference.

A. Commission statements from ICM and MCS are easily identifiable. Statements generated in ICM are in color and include the Arkansas Blue Cross and Blue Shield logo. Statements in MCS are black and white. Examples are below:

ICM statements are divided by producer and further subdivided by new enrollments and renewals. Manual adjustments, if applicable, will be reported as a separate section as well.

Q. What are the similarities and differences between the two statements?

A. ICM statements will contain additional information that is not reported on the MCS statements. Below is a summary comparison of fields in MCS and ICM: 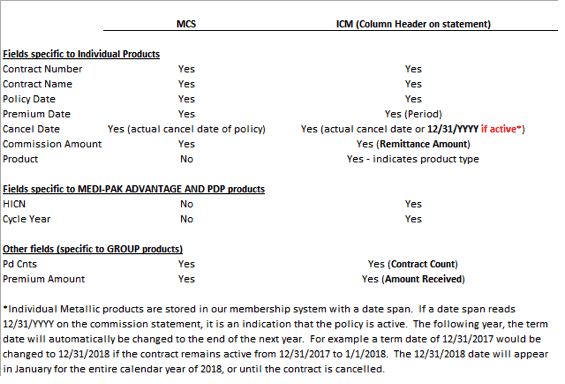 Q. Will the statements be separate in Blueprint for Agents? 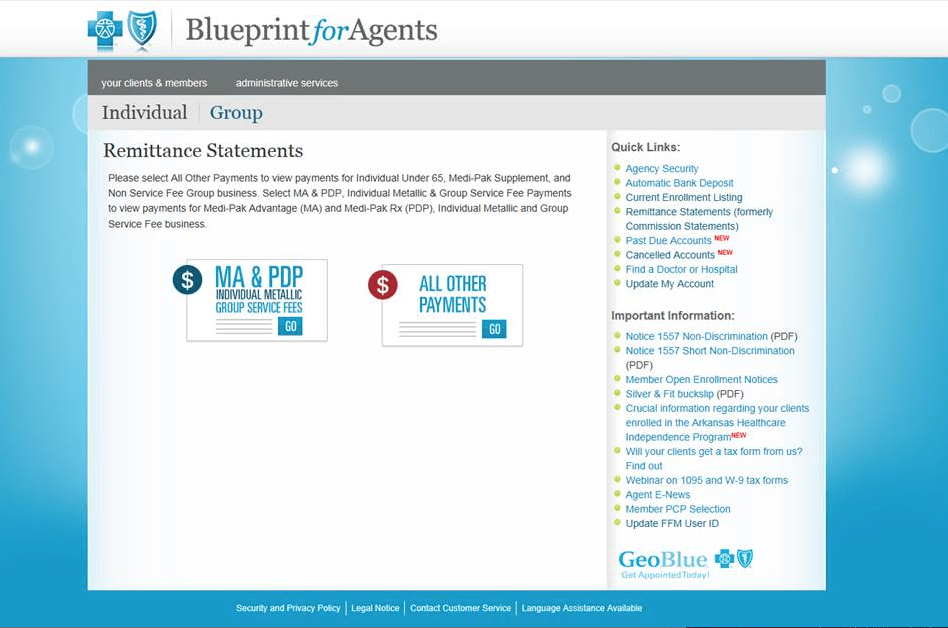 Q. Will the statements be available in PDF and Excel formats?

A. Yes, both MCS and ICM statements will be available in PDF and XLS formats.

Q. Are the policies I see on the ICM statements a comprehensive list of my individual policies?

A. No. Policies on the ICM statement include only those policies that have commission activity for the statement period. For a list of current active enrollments, please refer to your current enrollment listing on Blueprint for Agents.

Q. What payment periods will be reflected in ICM?

A. Currently MA and PDP contracts are processed and paid for the same reporting month; all other business is paid on month in arrears. For example, for Individual Metallic business – if a payment is received in February, the March commission statement will reflect payment for the February premium payment.

Q. What about other individual products like Essential Blue Freedom, dental and Medi-Pak policies?

A. Any non-metallic individual products will not be included as part of the Individual Metallic product migration to ICM in early 2017.

Q. What about retroactivity? Will I have to look through MCS statements to find retroactivity on Individual Metallic contracts?

A. In February 2017, ICM start with commission payments with January 2016 Individual Metallic activity. ICM will not bring in 2016 history (other than January). Any adjustments on 2016 retroactivity will be reflected on the ICM statement as a manual adjustment.

Q. It was mentioned that the migration from MCS to ICM will take place in 2017 and part of 2018. What will migrate to ICM next?

A. We are scheduled to migrate medical groups that have metallic benefits to ICM in the second quarter of 2017. Other products will be migrated based on line of business throughout 2017 and into 2018.